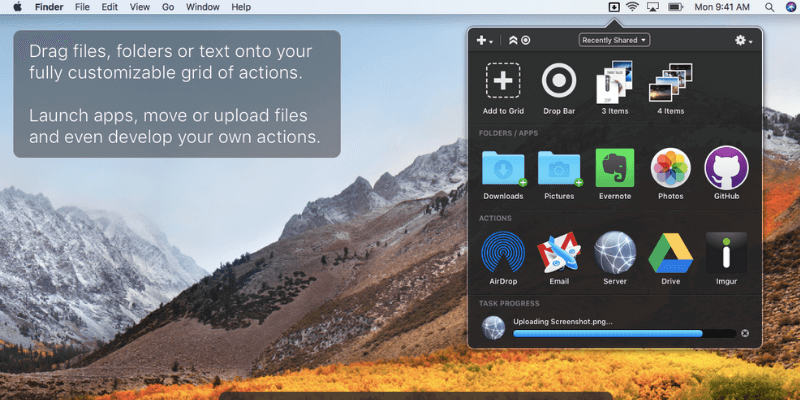 As a Mac user, there are two ways to move files from one folder to another:

Despite drag and drop functionality, you may find that it’s not easy to move files from location to another, especially if you have a crowded desktop or the files are deeply nested.

However, Dropzone is a tool that simplifies this by providing a space for you to temporarily store the files, and allowing you to move them later. It eliminates the need to open several folders just to move or find a couple of documents.

Dropzone is a simple application that lets you move and share files in a much more streamlined and efficient manner. Its main feature is the Drop Bar, where you can drag files temporarily until you are ready to move and use them.

Dropzone makes tasks like moving/sharing files and opening the relevant applications much simpler.

How Does Dropzone Work?

After you install Dropzone, it will appear in the menu bar. Clicking the icon will show the main interface. There are three main sections: Drop Bar, Folders and Apps, and Actions. 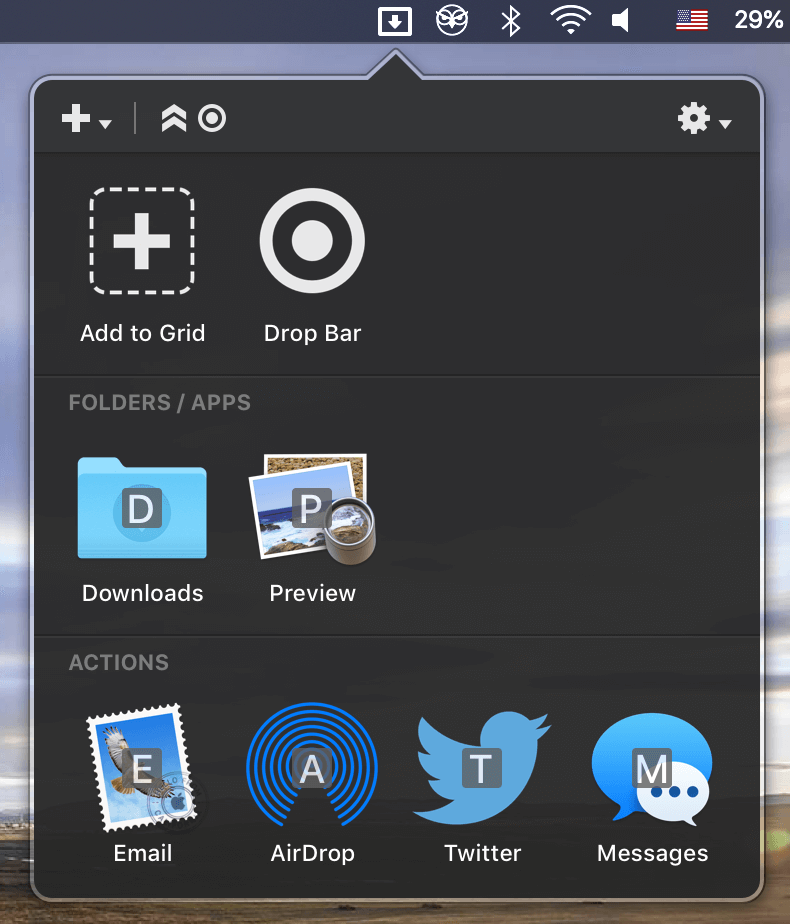 Drop and Move is Dropzone’s primary functionality, and is very simple to use.

The Drop Bar provides a space to stack your files. When you move files to Drop Bar, the files are temporarily held until you need them. They don’t crowd your desktop and are waiting for you to place them in the second location of your choice. When you need to use them, just grab them to the place where you want. 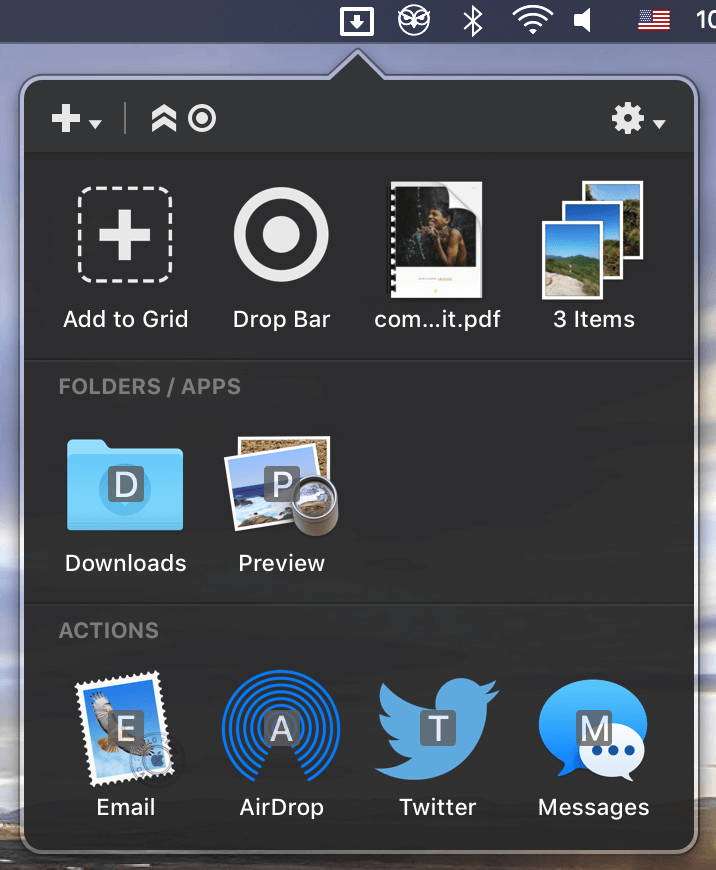 If you place files in the Drop Bar at different times they might appear as separate stacks, but you can always put them together.

Once you have a stack of files you want to move, you can just drag the entire pile to the new location without having to worry about individually selecting each item. This feature is great for simplifying your workflow.

At the top of the main interface, you can see an “Add to Grid” button. This function allows you to add some applications into Dropzone, which means they can be easily opened from the Dropzone panel instead of crowding your dock or forcing you to search through Finder/Launchpad. 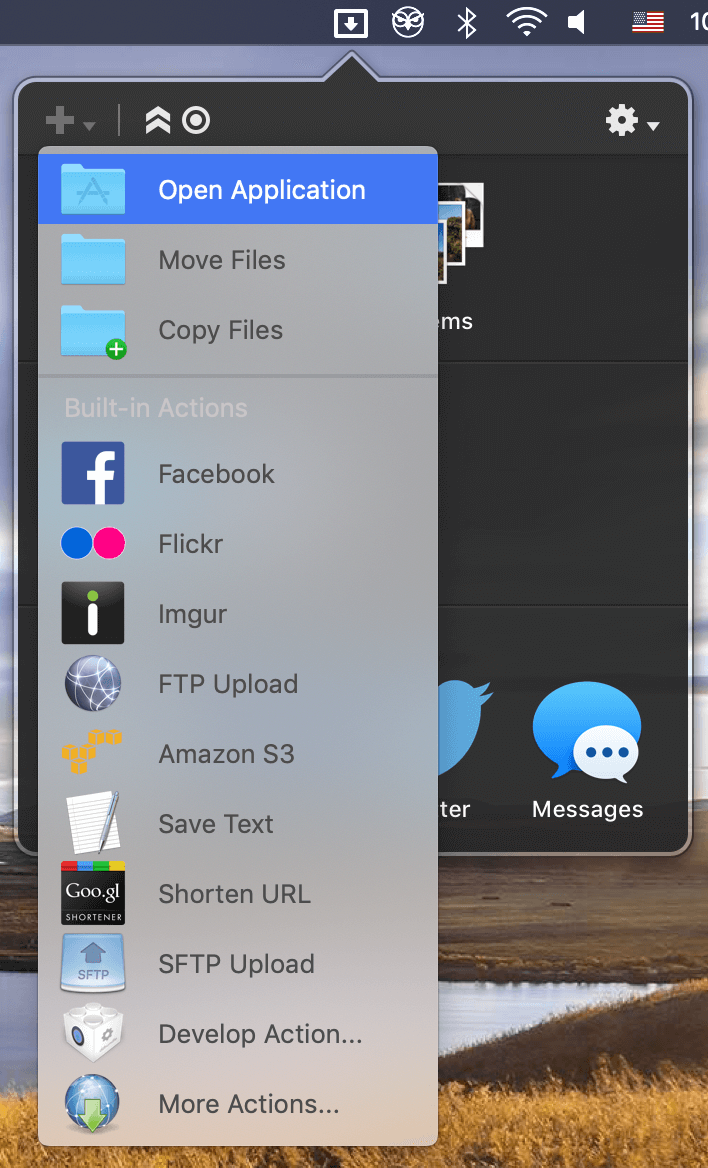 Additionally, if you add an application to Dropzone, you’ll be able to directly drag files into that application, not just into the Drop Bar.

For example, if you want to open 10 pictures, you can drag those 10 pictures into DropZone and place them on the Preview app. Dropzone will open those 10 images with Preview, rather than forcing you to individually double-click each file.

In Dropzone, sharing files is easy. It can be done through the “Actions” feature. There’s a variety of built-in actions. 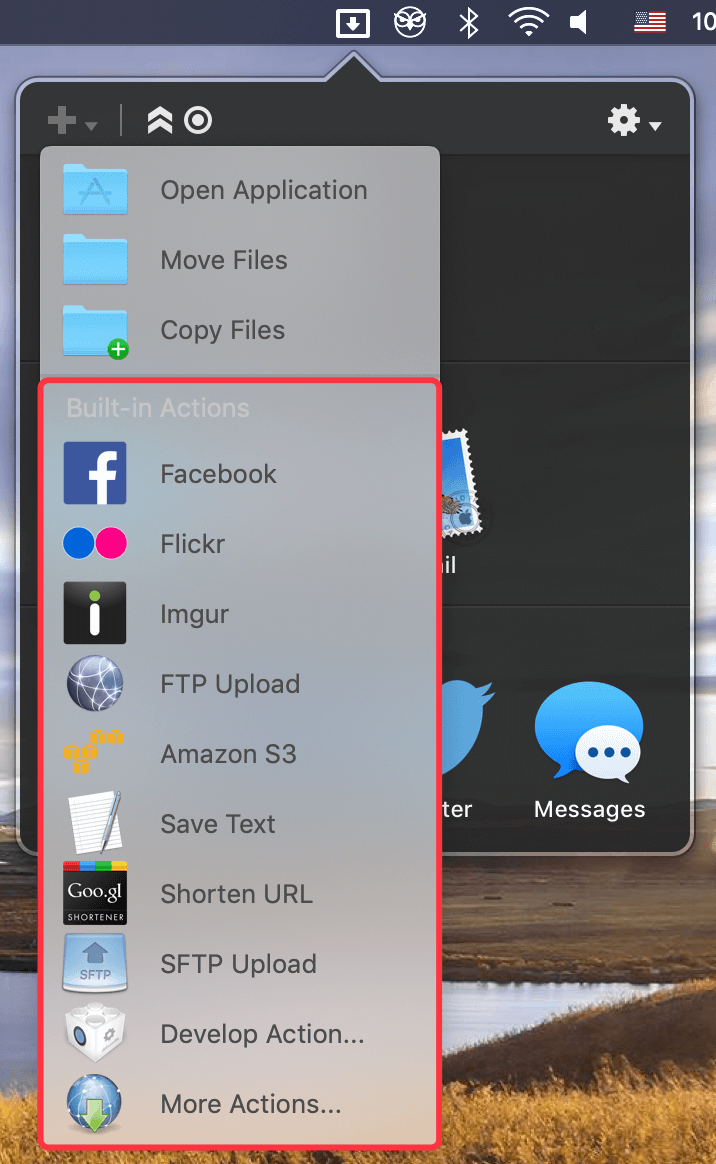 The built-in actions allow you to email or messages your files, share them on social media, or upload them to cloud service.

To use this feature, first, stack the files you want to manipulate. Then add them to the relevant action in order to avoid sending files one by one.

Dropzone is only available for macOS, and you can download it from Dropzone Website or the Mac App Store. The app costs a flat fee of $10, but offers a limited functionality version for 15 days if you want to try it out.

If you have a Setapp subscription ($9.99/mont), the Dropzone is included for free, along with dozens of other applications.

Is Dropzone Worth It?

If your Mac is your primary computer, you’re regularly digging for files, or your desktop is packed with icons, Dropzone is a powerful tool. It will help you significantly streamline your work and multiple tasks. You’ll be able to confidently drop files to Dropzone and move them efficiently when needed. It’s a good choice for anyone who wants to simplify their Mac workflow.

On the other hand, if you don’t do a lot of work on the computer or don’t mind a messy desktop, Dropzone may not be the right tool for you.

Dropzone is a productivity application that helps you move and share files faster. It creates a holding space that allows you to easily rearrange and organize your files, all while keeping your desktop clear and saving you the hassle of nested folders. If Mac is your main working computer, you’ll love working with Dropzone.

How to Block Ads on Safari Mac

How to Check the Chrome Version on Mac

What Kind of Coding Language does Roblox use?

How to Enable JavaScript on Mac Chrome

How to Hard Refresh Chrome on Mac