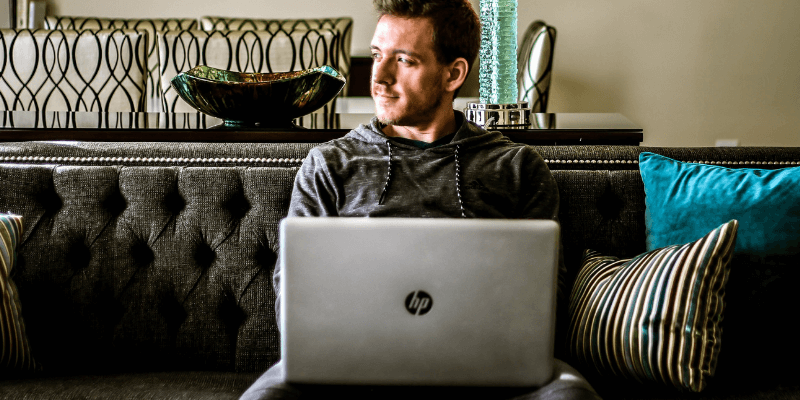 Like any computer, an HP laptop will run slowly over time — especially when it shows its age.

But if you are using a brand new HP laptop and it starts to lag or hang up, runs slow to boot up, freezes now and then, there’s definitely something wrong out there.

Actually, that just happened to a friend of mine, she bought a new HP notebook from a local store. Back to the apartment, she pressed the start button, guess what? It took her nearly 30 minutes to reach the desktop screen of Windows 10.

She brought it back to the store for advice. Well, it turned out that Windows 10 was the culprit — the annoying Windows Update took much longer to complete.

In this article, we are going to explore the possible reasons why HP laptops can run slow, and hopefully, you’ll walk away with a number of ideas on how to make your HP laptop faster AGAIN.

Note: we assume that you’ve already known and tried the “restart” solution, which is often the quick fix for many PC issues. So we’ll first go through the potential causes, followed by solutions and tips that would help speed up your computer.

The fixes and tips introduced in this post should apply to all HP laptop models such as Envy 13/15/17, Pavilion 15/17, Spectre, and Stream Notebook as long as it’s running Microsoft Windows 7, 8.1, or latest Windows 10.

Why is My HP Laptop so Slow?

All Windows PCs can get clogged up with junk files, unused applications, and many other types of files and programs. All these may cause performance issues with a variety of symptoms such as slowdowns, hangs, lags, just to name a few.

Possible reasons for a slow laptop (HP included) vary from case to case, but they all should fall into three categories in general:

How to Make HP Laptop Faster

While it’s hard to figure out the real culprits without a thorough diagnosis, here are some general fixes (and tips) that should help you identify and fix the problem.

If You Are Using a New HP Laptop

Most new HP notebooks come pre-installed with Microsoft Windows 10 operating system. When Windows 10 is setting up the initial update, your laptop will take a bit longer to boot up. And there doesn’t seem to be an effective way to get around with this yet.

“Windows 10 periodically checks for updates so you don’t have to. When an update is available, it’s automatically downloaded and installed, keeping your device up to date with the latest features.”

Don’t be surprised! All new PCs are pre-loaded with bloatware, in other words, programs that have been installed by default. However, most likely you will never need them.

Even worse, some programs sneak into the startup list and run automatically when your HP boots up.

According to this finding from ComputerWorld on how much bloatware can slow down a PC, it says:

“Computers that are free of third-party software…on average, start up 104% faster, shut down 35% faster and have 28 minutes more battery life than the same laptops with bloatware.”

How to fix that? There are a lot of manual fixes out there, but they either require time or technical skills (or both) to implement properly. If you are a computer person, you’ll be able to sort that out on your own. If you are new to computer, I recommend using CleanMyPC to handle them for you. 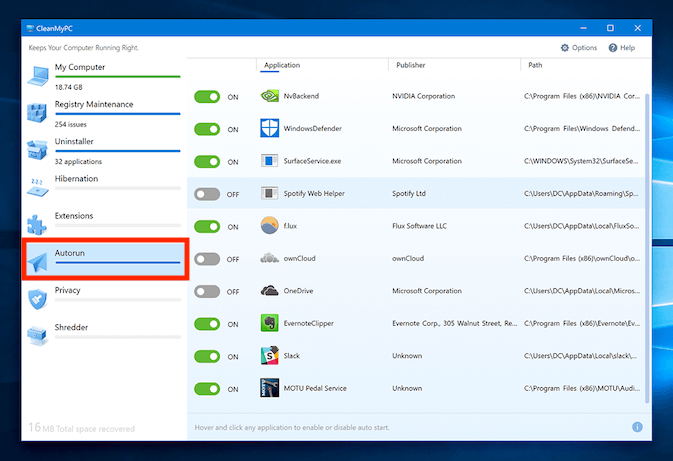 CleanMyPC is a professional disk cleaning program. It’s not freeware but offers a free trial this is downloadable and usable without paying. When you launch the app, go to “Autorun” and switch those unneeded apps from “ON > OFF” (see the screenshot above) and you’re good to go.

Furthermore, you can use the program to uninstall the bloatware in batch, saving time doing so one by one.

That’s pretty much all you can do with a new laptop that’s running slow or freezing constantly.

If your HP still runs slow after taking these two steps, it’s probably due to hardware issues or improper using habits.

For example, your HP is loaded with a mechanical hard disk drive (rather than a faster SSD), or your RAM is inadequate to meet heavy work such as photo/video editing. The solution is also quite simple but a bit costly — upgrade hardware, scroll down to Fix #5 below for more.

Also, don’t forget to check out the Additional Tips section below to get more ideas about how to keep your laptop in good shape.

If You Are Using an Old HP Laptop

Viruses and malware are unsurprisingly the top concern when it comes to PC performance issues.

They can cause serious damage such as crashing your computer, as well as smaller ones, for example, slowing down PC performance, collecting private information, compromising security, data loss disaster, etc.

To find out whether your HP computer has been caught by a virus or malware, you have to run an antivirus scan. We recommend Bitdefender Antivirus Plus — one of the best antivirus software in the world. A good alternative is Malwarebytes. 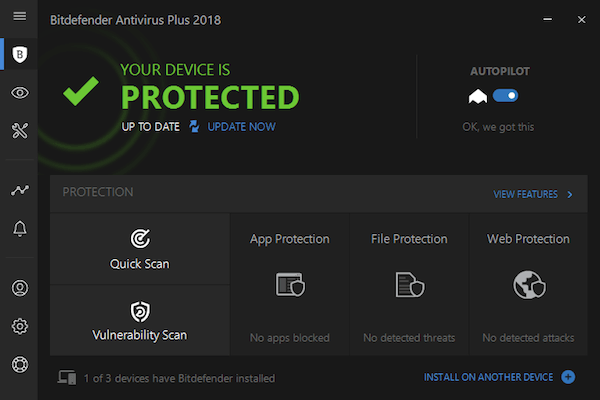 Adware or spyware, on the other hand, can also bog down your system performance, especially when you are surfing the Internet via a web browser (Chrome, Firefox, or Safari).

Adware often injects flash ads or redirects search queries to spammy websites, often without your awareness or permission. To check and remove the malicious software, use Webroot Internet Security.

Although it’s a myth that cleaning disk will speed up a computer, it is our experience that having more disk space often makes a computer perform better, at least we feel so.

You can’t solve all performance problems just by using a magic utility, but cleaning up the hard drive won’t go wrong. Plus, a cleaner PC will help boost your personal productivity as that helps you be more organized and find wanted files faster.

There’s no better tool for cleaning up hard drive than CleanMyPC — a tool, like its name indicates, is a program designed to clear up all kinds of junk and unnecessary files, optimize startup items, remove unneeded programs/plugins, and more.

How much free storage should you aim to get? According to HP Customer Support:

“Make sure there is at least 15% free space on the hard drive.”

You may have read somewhere that registry errors can occur, especially when you are used to installing and uninstalling third-party programs, some of the information is kept in the registry.

They may cause Windows issues like being unable to shut down the system, PC running slow, etc.

That’s why you need to check if your HP has Windows registry problems. Unfortunately, the process isn’t as easy as it may sound because it requires advanced tech knowledge.

Again, we suggest diagnosing and fixing this via the “Registry Maintenance” feature in CleanMyPC. 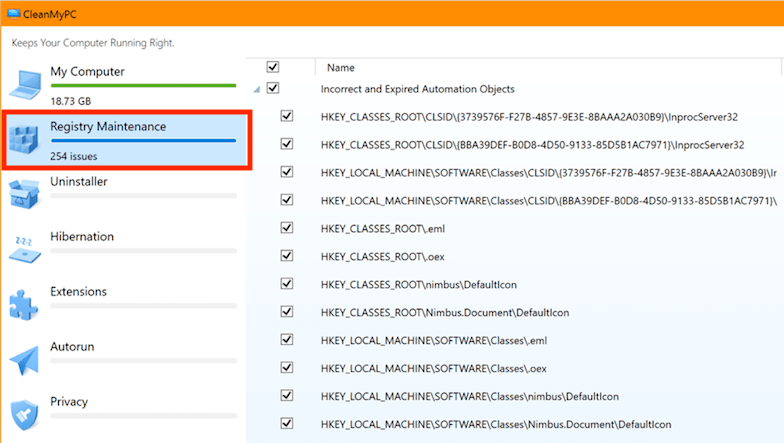 Yeah, I know. I also hate Windows updates. But they are super important if your HP computer is running on Windows 10. You should always keep those software you regularly use up-to-date, as this helps avoid application freezing issues.

Updating is often ignored by simply clicking “remind me later,” but it’s by no means a smart decision. To adjust that, you can check or enable auto-updates by going to This PC > Settings > Updates & Security.

This may seem a no-brainer option, but it’s probably the most effective way to speed up an old HP laptop particularly when it has been used for several years.

The hard drive could corrupt any day, and the RAM might be the bottleneck to run large programs.

It’s still cheaper than buying a new PC, or switching to Mac if you’re tired of living in the Microsoft world. 🙂

For HP laptop-compatible RAM (memory) upgrades, Crucial 8GB Kit is a great choice. If you are short on budget, go for Kingston Technology 4GB.

30 thoughts on “How to Speed up a Slow HP Laptop”