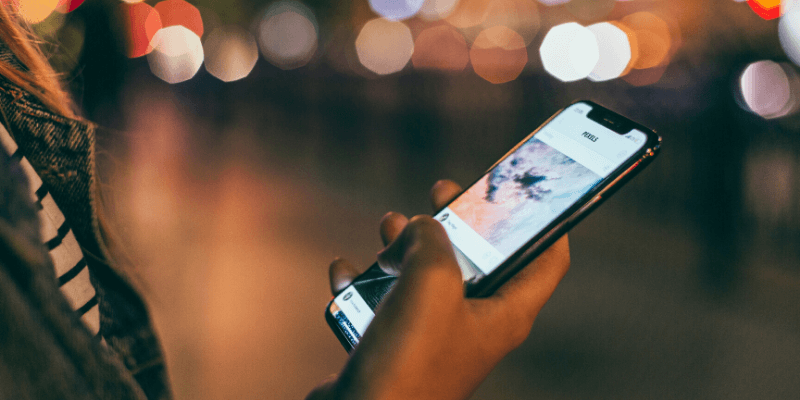 So, you accidentally tapped on your iPhone and deleted several precious snaps? Apple iPhone makes it easy to take awesome pictures, but these pictures can also be trashed with a simple tap? When you realize those great shots you’ve taken with friends or families are gone, panic often sets in.

Fortunately, it’s possible to retrieve deleted photos from an iPhone, through the “Recently Deleted” feature, or iTunes and iCloud backup, or a third-party iPhone data recovery software. These are the four methods we’re going to show you in this article and most of them are free.

Note: the methods below work with all iPhones as long as your device is with iOS 8 or later (you probably are).

Apple noticed the accidental deletion issue and thus added a “fail-safe” feature for recovering accidentally deleted media files. This built-in is called “Recently Deleted” – it’s available for iPhones with iOS 8 or later, and works to restore items deleted within 30 days. To check what iOS version your iPhone is under, go to Settings > General > About to find out. 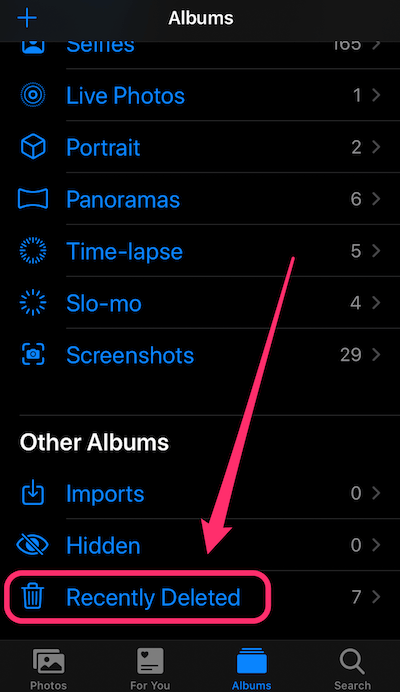 That’s it. Very simple, right? Once again, this built-in iPhone media recovery feature won’t work for every scenario, especially if your pics and vids have passed the “30-day” grace period. 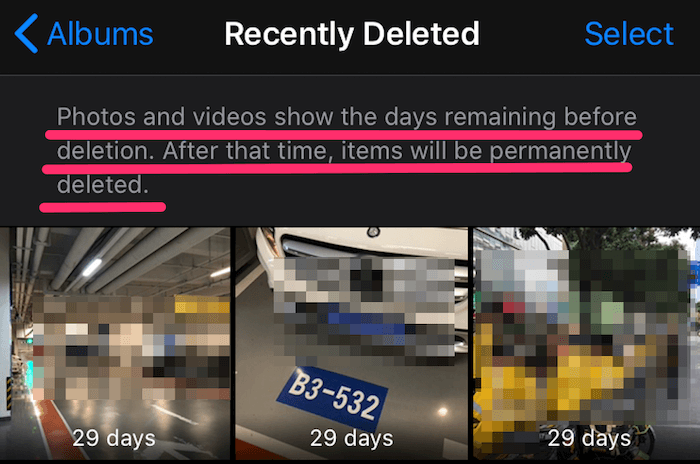 If this didn’t work out for you, try other methods below.

If you often plug your iPhone into your computer to use iTunes, you may have a backup right inside iTunes. This method only works if you’ve actually created a backup before you lost those photos, but will work even if you dropped your iPhone into water and lost everything (or an equivalent disaster). If your iPhone was beyond repair, you’ll want to follow these steps with a replacement iPhone. Here’s how.

Step 1. Plug your iPhone into your computer (the same one that you created the back-up on).

Step 2. Open iTunes. If there’s a pop-up telling you there’s a new version, update iTunes before trying the backup.

Step 3. Head to File > Devices > Restore from Backups. (Windows users that don’t see a file menu, access it with the Alt key).

Step 4. In the backup window, look at the list of available backups. Most likely, the most recent backup is the one that you want. But if you are looking to recover photos that you accidentally deleted a while back, you may want to choose the backup just after the date those photos were taken.

If you’re going a while back, it may be a good idea to make a backup first, so you can save those photos to your computer, then return your iPhone to the current state so you don’t lose even more files.

Step 5. Click on Restore. The process will take several minutes and will restart your phone — don’t interrupt the process or unplug the phone until the update is complete.

Find your photos on your restored iPhone? Great — if not, try the next two options.

The iCloud is a convenient, often used way to backup your images. Since iCloud backups are automatic, more users are likely to use the feature — which means there’s a better chance of getting those photos back. The downside is that iCloud usually only works for your 1,000 most recent photos, not those older gems. There are actually two ways to recover photos from iCloud.

Don’t need to restart your phone? You can access iCloud images in the Photos app on your Mac.

Open the Photos app, then click the Photos menu on the upper left and select preferences. Then, navigate to the iCloud tab. Put a checkmark in the iCloud Photo Library option. Close the preferences window, and your photos will automatically load, provided you use the same Apple ID on both the computer and iPhone.

While the iCloud may have limited storage space, it’s automatic, so once you’ve set it up once, you don’t have to worry about plugging into a computer to backup your phone — that makes it much more likely you’ll be able to get back your lost iPhone pictures.

Didn’t make a backup? You may still be able to recover your deleted photos using a recovery software. While using software can be a pricier solution, sometimes it’s hard to put a price on those lost photos. Most programs will also allow you to download a free trial so you can at least see if the recovery will work before purchasing a program.

There are a number of different recovery programs available, here are the most recommended options in the market:

dr.fone is a popular option because it’s simple and often works well. The initial download is free, a purchase is only necessary if the software can detect files to recover. Both a PC version and Mac version are available. Be aware though that some users have reported that they couldn’t uninstall the software.

MobiSaver is a great iPhone recovery software that’s also simple to use. Along with recovering your photos, you can use it to find lost contacts, messages notes and more. While the free version has a limit to the number of photos it will recover, it’s often worth a shot.

Losing photos can be devastating — often even more so than damaging an expensive phone. While you can’t replace your photos as easily as your iPhone, you can recover deleted pictures by using the Recently Deleted feature within iOS, an iTunes backup, an iCloud backup or third party software.

2 thoughts on “How to Recover Deleted Photos from an iPhone”