Just switched to Mac from Windows. I’m wondering how to defrag a Mac hard drive and make it faster because my MacBook seems to run slower after updating to the latest macOS. Is there an app I can use for Mac defragment?

Unlike Windows that provides a built-in Disk Defragmenter (now called Optimize Drives in Windows 10), macOS does not have a utility or feature like this.

And you probably don’t need to defrag a Mac drive most of the time, because macOS can take care of that automatically on its own, thanks to the way macOS organizes its file system i.e. HFS Plus (now APFS since macOS High Sierra 10.13). Also, your MacBook’s performance issue could be caused by other reasons.

But, there are cases that you can benefit from defragment. In particular, ​when your Mac has lots of large media files (pictures, videos, etc.) that are larger than 1 Gigabyte.

If that’s the case, then you probably need a third-party app like Stellar Drive Toolbox — an app that claims to be able to defrag Mac and make the hard drive run more smoothly.

Defrag, short for defragmentation, refers to the process of fixing disk fragmentation problems by keeping related data together thus helping decrease the time it needs to access certain files. Fragmentation is very common on Windows PCs. Therefore, Microsoft has developed a defrag tool — called Disk Defragmenter (for Windows 7 or older) or Optimize Drives (in Windows 8 and Windows 10). We have to remind you though, that defragging only applies to hard disk drives (HDDs).

macOS, on the other hand, does not offer this kind of defragging tool or option. Because defragmenting a Mac hard drive isn’t a necessary task. If it is, Apple would have added this feature as part of Disk Utility, right? That said, there may be some situations (as we mentioned above) you’ll need to defrag your Mac drive provided that your MacBook is aging.

Is Your Mac with Flash Storage (SSD)?

This is important because defragging is only necessary to a hard disk drive, and it would be a waste of your time to do so on an SSD. Therefore, we’d suggest you go ahead and check if your MacBook is loaded with an HDD or SSD.

To find it out, go to About This Mac > System Report > Hardware > Storage, there you highlight the drive, it’ll show flash storage or normal hard drive. 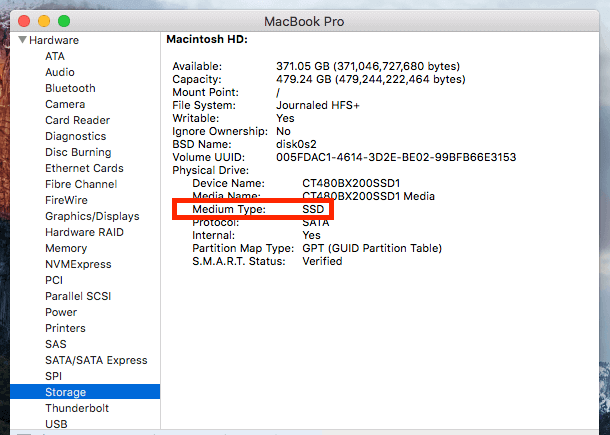 I want to warn you again, if your Mac is with SSD flash storage, DO NOT use any third-party defrag tools.

You can try Stellar Drive Defrag (update: this app is no longer available we thus removed the link) – a professional Mac defrag app that makes it easy to organize fragmented data and improve data access speed and overall performance, by searching for scattered fragments of data on a Mac hard drive (note again, HDDs only). One cool feature about the software is it actually allows you to monitor the temperature fluctuation of your Mac hard drive during defragging.

If you want to keep your Mac free of issues, we recommend CleanMyMac — it’s not a defragmentation app but does help keep your Mac clean and run at its best performance. Simply use the Maintenance module which will help optimize your Mac in a number of ways, such as verifying startup disk, repairing disk permissions. 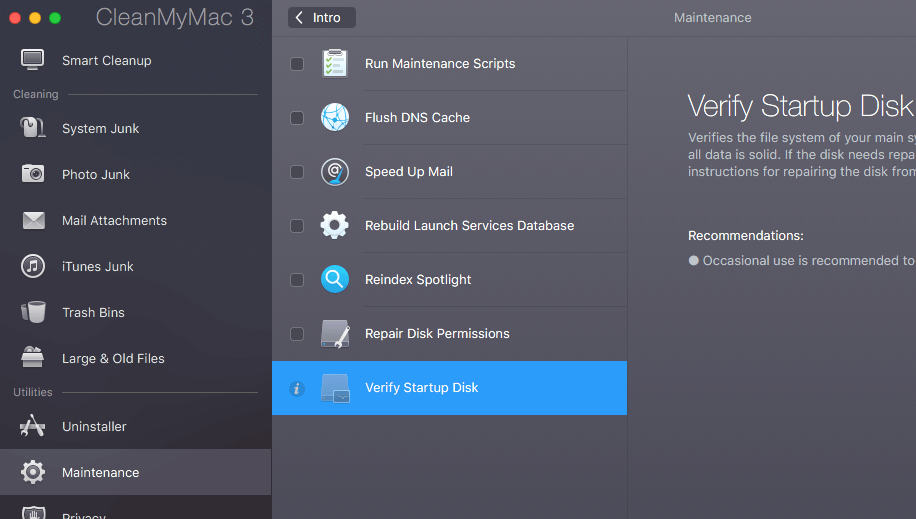 A slow Mac can be attributed to a wide range of reasons from hardware to software. For example, sometimes it’s not your hard drive that’s causing problems. It could be that you have too many startup items automatically running when your Mac starts, or you’ve multiple programs running at the same time. Inadequate memory (RAM) and lack of free disk space can also lead to performance issues as well.

As a result, if Mac defragging can’t solve your problem, consider having a thorough diagnosis of your Mac first, especially the hard drive (see how to health check Mac hard drive). Then figure out the culprits and then come up with the right solutions to solve the problems.