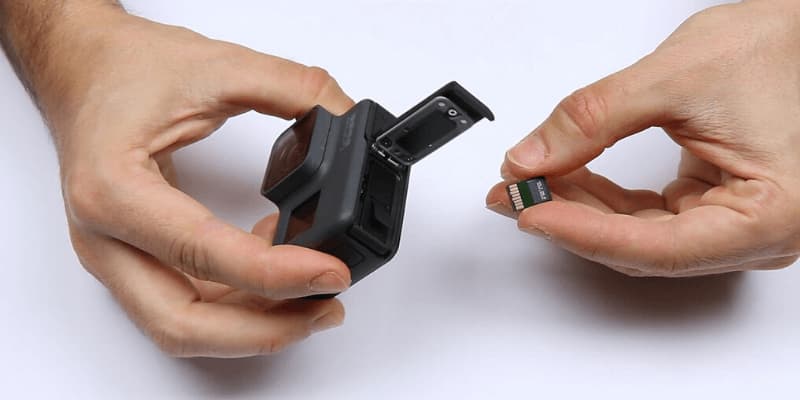 Owning a GoPro action camera is awesome, but only as long as you have a proper memory card for the device. If your speed is too slow, your footage will be clunky and choppy. If you don’t have enough capacity, you won’t be able to record for long periods of time. A good memory card fixes both of those issues.

This article breaks down four incredible GoPro memory cards by evaluating them on a range of specific features and attributes. Let’s take a look at them now.

Who Should Buy This?

Any GoPro owner can use the cards in this guide. It does not matter if you’re a professional photographer or just want to film your kids on vacations, the following cards will perfectly complement your device. Just pop them in your camera and shoot away.

These also make great memory cards for your cell phone. If you own an Android smartphone, chances are you can expand your storage with a micro SD card. These cards work great towards that end as well.

Best GoPro Memory Card: What to Consider in 2020

Buying a memory card with decent capacity is important because it ensures it won’t fill up too quickly. We suggest grabbing one that has at least 64GB of space to ensure you don’t run out during your shoot.

Always try to get a memory card that can achieve at least 100 MB per second. That will give you enough speed to record flawless 4K video. If your speed ever dips too low, your footage will suffer.

If you buy an off-brand or cheap card, chances are your end product will not look as crisp or as clean as you want. You may get lucky and get one that lasts a long time, but why take the chance? Always go with a trusted brand.

We suggest prioritizing reliability here, as it will keep you from buying a memory card that simply doesn’t work. Behind that, you need to make sure the speed allows you to record videos at your camera’s top resolution and frame rate. Capacity comes in third, as the amount you can record and how much space you need entirely depends on your situation.

SanDisk is without a doubt the leader in the memory card space, and their Extreme series shows why. These cards can record at high resolution frame rates with ease. They have also been used by professional photographers and videographers for years. There are simply no other cards that can match them in terms of functionality.

TEAMGROUP may not be a household name like the others on this list, but they make quality components at an affordable price. The brand made a splash in the computer market thanks to their hard drives and memory devices, and their Go Card brings that quality to the card world. It features a decent capacity range and comes with fast speeds that allow you to flawlessly record your GoPro footage. This card is specifically designed for GoPro, as the name implies, so you know it is going to give you great results.

If you want a solid SanDisk without paying extra for the Extreme series, pick up an Ultra card. This still offers plenty of recording speed, enabling you to capture even the most strenuous 4K video, and it always creates silky smooth footage. In addition, there are many different capacity sizes available. You can buy a card as small as 16GB, or go as high as 512GB. It all depends on what you need.

Samsung spent years making computer hard drives, and they used that knowledge to craft the EVO select. With this model, they created a fast memory card that is also extremely reliable. It works wonders with the GoPro and generates some of the best-looking footage out there. If you want a solid device from a trusted name, this is the card for you.

If you’re buying a memory card and need to use it with a computer, you may want to pick up a micro SD to USB adapter. That will allow you to plug your card into the SD reader that comes standard on so many devices and give you a way to transfer your files directly to your computer.

When picking out your memory card, you should also get a memory cardholder. If you plan on doing long shoots or using multiple cameras, chances are you’ll have multiple cards on hand. In such cases, it’s always nice to keep them organized.

Every GoPro owner needs a good memory card. They perfectly complement the device and give you a lot of memory to work with. The above four do that and much, much more. That is why they made our list, and why they offer such excellent results.

GoPros cost a lot. Don’t skimp when it comes to getting them support.

Are you loyal to a certain brand of memory card? If so, which one? Let us know in the comments below!

Jessica is the co-founder and content manager. She has been fascinated by the startup culture in Silicon Valley and she loves building things from zero to one. When she is not writing, she loves getting close to nature and shoot photos with her iPhone and Canon EOS 80D.